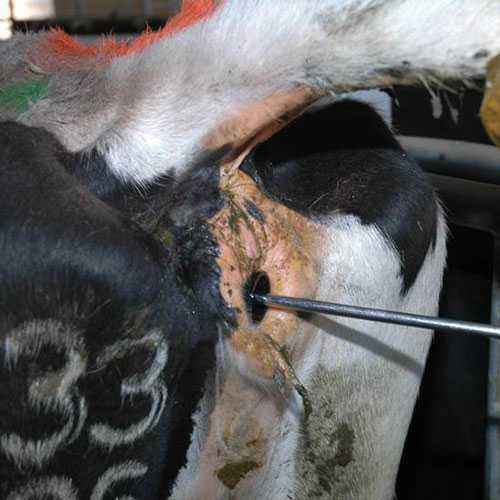 Cows endometritis is a disease inflammatory in nature, which affects the mucous membranes, as well as various layers of the uterine body. Most often it develops after calving, as the cow spends a lot of strength and vitality during pregnancy. 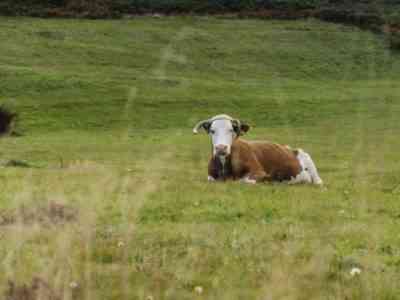 Poor gynecological management of pregnancy or birth trauma can also contribute to the development of endometritis, which subsequently become a source of infection. We learn more about this disease, analyze the primary signs, diagnostic methods, symptoms and treatment, as well as prevention of endometritis in cows.

Causes of endometritis in cows maybe a few. Absolutely any inflammatory process in the body of a cow can be triggered by an infection.As mentioned earlier, endometriosis most often develops due to infection in the uterine body during childbirth or in the presence of a chronic gynecological disease in the animal. In addition, cases of infection during estrus are not uncommon, as access to the uterus is opened. Endometritis can occur during the gestation of the calf, during the period when the mucous plug leaves. In addition, it can act as complications after serious illnesses such as tuberculosis, brucellosis, etc.

In addition to all of the above, endometritis can be caused and provoked by errors in feeding and care, that is, neglect of standard hygiene requirements and dietary patterns. All this significantly reduces the immunity of cattle and does not make it possible to deal with pathogens.

How endometritis manifests itself

Each of the above forms of the disease will be described in detail below. It is extremely important to determine in time exactly what form of endometritis your burenka has, because the course of treatment will depend on this.

In this case, the uterus is affected, but only it surface layer. Externally, you can notice serous mucous discharge from the genital fissure.Due to the fact that the peak of the disease occurs in the postpartum period, it is sometimes difficult to diagnose endometritis and distinguish it from normal secretions, which are considered a variant of the norm after calving. That is why most often catarrhal endometritis develops into a more advanced stage when purulent exudate is connected.

In the case of purulent-catarrhal endometritis, the deeper layers of the uterus are affected, except Moreover, the ability of the uterus to contract is impaired, the discharge becomes more abundant. Vivid signs can be detected within a week after the pathogen enters the body of the cow. First, the owners see changes in the nature of the discharge: they become brown, yellow or even reddish. Often, upon close examination, you can see their heterogeneity: an admixture of flakes may be present in the mucus. They become more abundant when the animal is pushing or during a rectal or vaginal examination. With insufficient hygiene, you can see the remains of secretions in the area under the tail.

What picture opens with rectal examination with a purulent form of postpartum endometritis? The doctor will see a hyperemic mucosa, the walls of the uterus will most likely be thinned and lose elasticity. On palpation, the body of the uterus will be significantly enlarged.

However, with such symptoms, you can not notice any deviations in the behavior of the animal, the overall health in this form is usually kept at normal levels. If the symptoms are accompanied by an increase in temperature and weakness appears, it can be said that endometritis develops into an acute stage, which requires medical treatment.

This type cow disease (fibrinous endometritis) differs from the rest in that the secretions will contain particles of fibrin. Usually, the acute fibrinous stage appears immediately after childbirth, but sometimes it can be the result of an untreated catarrhal stage.

Possible increase in temperature, deterioration in general condition. However, all these symptoms may not appear. If the cow’s immunity fights the pathogen, fibrinous endometritis will pass in the background.

Necrotic endometritis is a severe form of the disease in which the membrane of the endometrium, one of the layers the uterus is so affected that the tissues disintegrate and are excreted naturally along with the mucus. Most often, the development of necrotic endometritis can begin after a complicated birth.

To worsen and complicate the course of the disease, it can happen if the protective functions do not work, that is, the immune system of the cowshed is reduced.The causative agent with poor resistance can affect the deep layers of the uterus, while its mucous membrane will be noticeably thickened due to a noticeable violation of the tide and outflow of blood supply. At the medical examination, the veterinarian will see a picture in which the tissue is necrotic and subsequently rejected by the uterus. In places of such a lesion ulcers and erosive wounds are formed. If the process of tissue destruction has gone so far, there is a risk that the endometritis pathogen after calving not only in the blood system, but also in the lymph.

In parallel with necrotic endometritis, vulvitis, cervicitis, and even colitis may develop as a complication.

End etrit with signs of gangrene Here the animal will experience pain, as the uterine cavity becomes inflamed. In addition, intoxication increases every day, which negatively affects the general condition of the animal.

In addition to the fact that the cow experiences the traditional symptoms that appear during any inflammatory process (fever and general weakness), there are those characteristic of gangrenous endometritis:

Usually, the death of a cow occurs already 5-7 days after the onset of the first symptoms. The direct cause of death of a cow with endometritis is sepsis of internal tissues and a rupture of the uterine cavity.

The chronic course of the disease (latent) results from untreated endometritis or untreated at all. In this condition, a pathological change in the surface of the uterus is observed, sometimes there are atrophic degenerations.

During a laboratory examination, an increased level of leukocytes and areas of dead epithelial tissue will be detected.

It is logical to start treating endometritis in cows and the rest of cattle by cleansing the cavity m weave.This will make subsequent treatment more effective and balance the normal healthy microflora in the uterus.

It is worth saying that washing is strictly contraindicated in endometritis with gangrene, as it can aggravate the course of the disease and provoke uterine rupture.

After washing, you need to perform 2 more mandatory stages of therapeutic care: to influence the positive dynamics of the contraction function, and then finish the treatment with a special rectal massage.

How does the uterus wash in koro

In order to flush the uterus sick cows, you need to choose a special antiseptic preparations. They must be gentle and non-aggressive, so as not to injure the tissue even more. It can be:

To inject the solution, you will need a special pear, Esmorh’s mug or Janet’s syringe. These devices will allow you to fill in the amount of fluid you need for washing at a time. It is important that all the fluid needed for internal administration is warmed up to the body temperature of a sick cow.It is worth revising the volume for administration depending on the nature of the disease and whether it is treatable.

How to increase uterine tone and restore tissue elasticity

In order to restore uterine contractile function, one of the following drugs must be used:

Veterinarians advise to make injections in parallel with washing, as this will positively affect the excretion of mucous secretions. In addition, before choosing a drug, it is better to consult a doctor, he will tell you what will help in a particular case and help with the dosage.

How to carry out massage of the uterus

Massage the uterus carry out independently at home. These manipulations will help to remove purulent and mucous deposits in it as soon as possible. For self-washing, sterile gloves will be needed, since the massage is performed rectally.

Insert one hand into the rectal opening, trying to find the uterine cavity as soon as possible. At the very beginning of the massage you need to make light hand movements that resemble stroking. Such an event will contribute to the speedy removal of exudate.

For the best effect, you need to correctly combine massages with injections. This scheme will allow you to quickly bring the tone of the uterus back to normal, as well as return the reproductive system to normal. In no case should you massage with injections, as this can lead to prolapse of the uterus from the genital gap.

Since endometritis in cows often involves the addition of pathogenic microflora, veterinarians prescribe antimicrobials or antibiotics to combat it. It is important to take into account that local administration of drugs is preferable, that is, to use them in liquid form in order to act directly on the site of the lesion. Which drugs are suitable:

If the course of the disease is complicated, it is worth adding to the local therapy a course of antibiotics administered subcutaneously or intravenously, depending on the severity of the disease. If the endometritis in the cows is accompanied by painful sensations, painkillers should also be added.

It is necessary to take up the prevention of postpartum endometritis in cows immediately after the cow has calf. If you provide her with normal nutrition and appropriate living conditions, then with a high degree of probability it will be possible to protect the animal from postpartum endometritis in cows. It is especially important to comply with these recommendations when the cows are born. Nutrition must be appropriate so that there are enough nutrients for two.

It is imperative that the cow is provided with adequate gynecological care, especially during labor.In no case should you interfere in the process of childbirth, if there is no medical indication. If during the delivery process you need to drag the calf, then you need to do this only during the period of attempts. If not, oxytocin is administered to the cow. In the event that after the appearance of the calf the last one does not leave, you should wait 5-7 minutes and immediately after their administration start the administration of the drug, which will restore the labor.

All these measures will ensure that the cow will give birth normally and endometritis will not develop.