One of the most common diseases in cattle is brucellosis in cows. Brucellosis can also be diagnosed in sheep, goats and pigs, but is not found in poultry. Importantly, bovine brucellosis in cattle can be a source of danger for humans, transmitted in case of contact with a sick animal or by eating milk and meat from infected livestock.It is not recommended to treat brucellosis in cows, since it does not bring the desired results, but worsens the symptoms and the current quarantine situation. 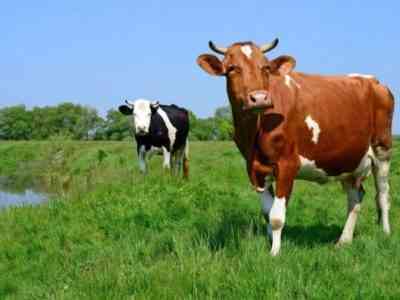 Nature of the disease

Brucellosis is also referred to differently as Maltese fever (in some cases, goat fever), and this disease is provoked by the bacteria of the same name, the nature of which was first discovered in a Maltese goat and described in 1887 by a doctor in the military field D .Bruce.

An environmentally resistant bacterium can be active for up to 2 months from the moment the animal enters the body. In the coat of cattle, it remains tenacious for at least 4 months. When located in the soil layers, brucella remains viable for up to 3.5 months.

Brucella bacteria infect the human body through penetration through the skin and mucous membranes, through the respiratory tract. Eating contaminated foods leads to illness due to the fact that the infection remains active for a long time in water and unpasteurized dairy products.

At risk for brucellosis are agricultural workers who come in direct contact with animals, among which veterinarians, milkmaids, farmers.

In the body of cows, brucellosis begins to develop after up to 10 or more microbes pass through microcracks on the skin and mucous membranes, through the digestive organs through ombikorma and drinking water in the respiratory system – from close contact with those suffering individuals. The pathogen of brucellosis that enters the body through an open wound passes through the lymphatic system, subsequently entering the blood of the calf or cow.

At elevated temperatures ranging from 60 to 65 ° C, the brucella dies after 15 minutes – half an hour, when the boiling point is reached death of the infection occurs instantly. At low temperatures, the ability to activity of brucella can remain up to 7 days in milk, in frozen meat products it remains for 5 months. The direct sunlight and disinfecting chemical treatment have a detrimental effect on the infectious process.

Symptoms and course of the infection

Brucellosis in cows can occur in one of 3 forms, including:

The pathogenesis of brucellosis most often has a chronic manifestation of the disease.

When brucosis occurs cellulosis in cows there is a disease-specific symptom:

In the course of brucellosis in cows, weight loss is noted. Sometimes infection leads to a concomitant appearance in animals of endometritis.If the immunity of animals is too low, accompanied by poor quality conditions of keeping and feeding, the presence of other infections, a calf or a cow may die due to brucellosis.

Because the infection spreads rapidly among cattle, if the first symptoms appear, treatment is not carried out: to prevent more serious consequences, they resort to the slaughter of animals.

The symptoms of cows in the presence of brucellosis are quite blurry, so often only one m featured diagnose the disease is not possible. To make an accurate diagnosis, laboratory tests are carried out.

The veterinarian may suspect the disease or the owner himself may be involved in more frequent cases of miscarriages in animals. For an accurate diagnosis, a choice is made in favor of laboratory tests that can be performed:

An aborted fetus or milk or blood from a cow is taken as a material for diagnosis and research.

Wright agglutination reaction – the most affordable way to determine the presence of brucellosis in an animal, during which the antigen taken for reaction is monitored.

To detect the causative agent of the disease, abortin is injected into the animal, according to which after a day, sometimes after 2, but no later than 3, it is studied and concluded the presence or absence of an ailment. In case of a positive reaction, swelling is noted at the injection site. However, when using this method, we must not forget that in the case of bovine brucellosis, the animal will give a positive reaction to the drug further.

Treatment cows from infection still have not confirmed their effectiveness, effective drugs against the disease have not been found. The most effective way to combat cow brucellosis disease in order to maintain a healthy livestock is not to cure the animals, but to slaughter the sick individuals if there is a diagnosis.

To reduce the risk of the disease appearing on the farm, it is possible through preventive measures.

Vaccination is still the most effective way to avoid brucellosis compared to trying to treat animals. The vaccine is vaccinated on a voluntary basis annually.

Keeping animals must meet the necessary sanitary and hygienic requirements, which require thorough disinfection of cowsheds where there are sick individuals and timely resettlement of diseased animals.In cases of miscarriages in cows, healthy individuals move to other isolated premises so that the remains of aborted corpses do not enter their bodies with water and feed.

Brucellosis characteristic of cattle is dangerous for humans. As a result of infection with milk or meat from a sick animal in humans, the heart, blood vessels, digestive system, urinary organs are disturbed by the causative agent of the disease.

For the prevention of brucellosis acquired in epidemiologically unfavorable conditions and areas A number of additional measures can and should be taken for dairy and meat products, including the following processing methods:

The person has symptoms Diseases occur no earlier than 2-3 weeks after the pathogen enters the body. Sometimes this period of infection is delayed up to a month. The first signs will be:

The course of brucellosis in humans and characteristic symptoms can be traced for up to 4 months, during which treatment is carried out. At the same time, an aggravated period of infection can be observed, which occurs in the form of an increase in temperature up to 40 ° C, increased pain, often there is a loss of consciousness due to disruption of the nervous system hallucinations are noted.

Most often men with age-related brucellosis categories from 25 to 35 years. The male to female ratio is approximately 6: 2. Cases of illness in children are rare: up to 2%.

Prevention, which involves the use of special clothing and shoes when working with livestock, helps vaccinate themselves. In addition, vaccines are offered to people at risk.