Mastitis in a cow or in cattle is a common disease that occurs mainly in pregnant females or in cows after calving. If you decide to breed cows on your farm, you need to know how to treat at home, what drugs to use and how to protect the animal from such a disease. Cow mastitis is a common udder disease in which inflammation occurs. 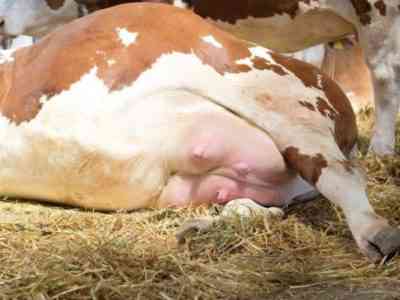 All veterinarians recommend as a preventative measure to monitor ur vnem milk a cow and observe cleanliness and disinfection of premises. These are the main requirements in the prevention against mastitis. Treatment of mastitis in cows at home can only be carried out until the veterinarian has visited the animal. Self-treatment with such a complex disease is excluded. If the female is not properly treated, mastitis can go into an advanced stage, which is even more difficult to cure, so at the first signs of malaise in the animal, you should immediately invite a veterinarian to examine and collect tests.

Types and symptoms of mastitis cows

How can mastitis be detected in cows

Despite any cause of the disease in cows, milk mastitis tests can be performed to determine the presence of the disease. This test can be performed in the first days after calving. Mastitis milk in cows, such a test, if properly performed, will show immediately. To do this, milk a little milk for analysis. This procedure is repeated all the time at least 1 time per month until the end of the lactation period. Many farmers, after taking milk for a test, to find out if there is a manifestation of mastitis or not, pass it to a special vet. the lab. If this is not possible, then you can conduct a test at home. For diagnostics, it is necessary to purchase control plates MKP-1 and MKP-2, 5% Dimastin solution.

1 ml of milk is pumped into one cell from each udder lobe. 1 ml of Dimastin solution is added to colostrum. The resulting liquid was stirred with a glass rod. After 15 minutes, you need to check how the contents of the cells have changed. The first drops after decantation contain bacteria, this option is not considered a deviation from the norm, but only pure milk is needed for analysis. To conduct the analysis correctly, you need to pour the first drops into a different container, and for analysis take the milk of the middle stream.

If the fluid has not changed and remains homogeneous, this means that the cows are healthy. Jelly-like clots may indicate a possible disease.If the clots are voluminous and noticeable, this is cow mastitis. An orange color does not indicate a deviation; it may be worth repeating the test. Red and raspberry shades are a pathology.

It is extremely important to determine the presence of the disease: it will depend on how to treat the burenka. You can do the test yourself, but even after receiving the results, you should consult your veterinarian to confirm them. You need to invite a specialist to your farm to collect tests from a burenka and at the same time ask the veterinarian to examine other animals.

Treatment of mastitis in burenki

so that the medications quickly help in treatment, veterinarians prescribe anti-mastitis antibiotics. Serous mastitis can be treated, for example, by injecting 0.25% novocaine intravenously. Such an injection is done on an isotonic sodium chloride solution in a dosage that is calculated based on the weight of the burenka and the stage of the disease. Such treatment can only be carried out taking into account the recommendations of the veterinarian or under his supervision. Heparin or ichthyol ointment also gives a positive result. You can use an ointment from camphor mastitis (camphor) or Vishnevsky ointment.

These means rub the udder of the animal to relieve inflammation and pain. Drugs such as oxytocin or amoxicillin may be prescribed to clean the udder. You can cure inflammation of acute mastitis with Penersin and Masticide.Such drugs are mainly used to treat acute mastitis in a neglected and even chronic form. The drugs are introduced into the udder through a sterile catheter for 4-5 days. Usually already on the 5th day after treatment, Burenka milk is suitable for consumption.

Acute mastitis cows. Experience of complex therapy. Acute mastitis in cows.
TREATMENT OF MASTITIS IN A COW: need anti-inflammatory!
how to remove mastitis from a cow

A solution of rivanol, potassium, streptocide or ichthyol is used as a medicine for mastitis in a purulent form. Funds are poured into the udder up to 3 times a day. Treatment after any mastitis in cows should be recorded and continue to be detected until new symptoms are detected. With a purulent form, bicillin is also prescribed, it is administered intramuscularly. Injections and syringes before placing the medicine are checked for sterility. Also, intramuscularly, veterinarians prescribe nitox.

Medications in combination with proper nutrition

If the case is advanced and the cow has acute mastitis, then there is a special novocaine blockade. Be sure to consult about the use of any medications, as some are suitable for Burenka, while others are not.

Against mastitis in cows, it is necessary to choose not only suitable treatment, but also adequate therapy, to ensure proper care during treatment. It is imperative to adjust the diet, it is best to replace succulent feed with dry, rich in fiber, at least for the period of treatment before recovery.

It is also recommended to limit drinking. Of course, water should be given, but not in plentiful quantities. Many studies have shown their effectiveness on specially designed vaccines. As a prevention of this disease, you can put vaccines against different mastitis.At home, some farmers inject Mastivak, but only according to the prescription of the veterinarian and in his presence.

How to treat burenka with folk methods for mastitis

Modern society rarely heals burenka with folk means, but sometimes forgotten methods can be effective, especially at the initial stage. If the cow has a weak form of mastitis and this disease manifests itself at an early stage, you can try to improve the condition of the individual. The inflamed udder can be washed with warm and clean water with the addition of salt, or rinsed with a nettle broth. Any ways are good if the cow feels good, does not limp and allows touching the udder. Another effective remedy for mastitis is udder massage.

After the milking process is completed, the compacted areas of the udder are massaged, as if imitating clay sculpting. With fibrinous mastitis, applications from clay are performed, so the disease goes better. The clay solution is mixed with the leaves of yarrow, nettle and plantain. All these herbs have an antibacterial effect. All recipes can be edited a little and instead of 3 herbs take at least one. To cure the cows, many farmers even read a special conspiracy.

Recommendations for the care and maintenance of animals

After calving and before it is necessary to completely disinfect the room. Some farmers even rub the floor with iodine to decontaminate the place for calving and further breeding.Running a burenka, when she only has milk, needs to be done with clean hands and in warmth. If the pens are cool, the animals can catch a cold and make an udder inflammation. If milking machines are installed on the farm, they must be sterile, since any infection through the milk can enter the udder. In which case, if a dirty milk machine becomes noticeable, it must first be washed and then put into production.

Together with antibiotics, you should ask the veterinarian to prescribe probiotics as well, because after serious medications dysbacteriosis can begin. Before each milking, as a prophylaxis, it is required to take a rule to wash your hands with antibacterial soap. Before the milking process, the udder must be washed with warm water to remove dirt.

After calving, when the calf is first launched, the calf is allowed to feed the calf to drink colostrum first, and only after it milk. If you do not follow such simple requirements, the cow will stagnate milk, which can provoke inflammation of the udder. In the diet of lactating females, foods and supplements must be included to activate immunity.

At the slightest suspicion of the occurrence of the disease, you must act, otherwise there is a risk of getting mastitis in the cows, resulting in irreparable damage to the farm. At the same time, it is important not to forget that getting rid of the ailment with folk remedies is not as effective as the antibiotics prescribed by the veterinarian.