The birthplace of this breed is considered to be Simbirsk a province where a lot of experiments were carried out in order to breed a cow that could easily adapt to local climatic conditions. The Bestuzhev breed of cows belongs to the breeding category and was bred in the 18th century on the basis of local and German cattle. 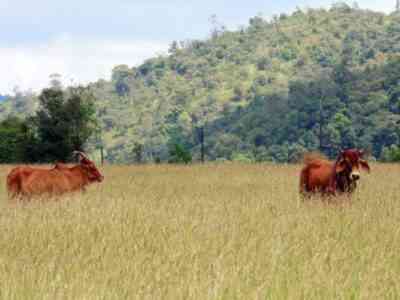 The Ulyanovsk region, where this “experiment iment “gave the desired result. The main direction in which the development takes place and removing rocks, was to obtain meat and milk, individuals with characteristics that were not available to most species. As a result, breeders have achieved rates of 4 thousand. liters per year per cow. At the same time, milk has a fat content of 4%. Due to these indicators, this species from the point of view of business can be safely classified as profitable and highly efficient.

Outwardly Bestuzhev breed of cows is distinguished by a strong physique, as well as excellent endurance indicators in climatic conditions, which are classified as unstable.

Even taking into account the fact that this breed is becoming more and more popular every day and receives more and more positive reviews and characteristics, the total population does not exceed 1 million individuals, which is a rather modest result. The leaders in terms of the number of goals at the moment are Ulyanovsk and Samara regions. Good indicators on the growth of breed popularity are also recorded in Tatarstan and Bashkiria. A number of regions of our country have recently been gaining momentum and reaching very decent indicators.

Given the relationship with the best breeds, the appearance of Bestuzhev cows meets all existing standards . The fact is that in the process of formation of the breed in question, foreign bulls directly participated, its external characteristics are very attractive. Due to this, the average weight of the Bestuzhev breed bull reaches 1 ton on average, while females are capable of gaining weight up to 600 kg. Growth rates for the bull are at the level of 1 m 60 cm, and for the cow – up to 140 cm.

The udder is characterized by excellent development, and also has the shape of a cup. The head of the bull is massive, and in the cervical region there are several noticeable folds, while cows have medium sizes and the presence of folds is often barely noticeable. The backs of these animals are even and massive, the limbs are strong and have good developmental indicators.The Bestuzhev breed of cows has massive and voluminous muscles. The breed standards assume the predominance of a motley red or red suit.

The breeding of the described pets is excellent for receiving meat or milk, and it is due to such universality on an industrial scale that this species is widely used for both purposes . Proof of the effectiveness of this approach are numerous records that are recorded on specialized farms, where milk from one cow often approaches or even overcomes the mark of ten tons of milk.

Young cattle of bestuzhev breed are born by the standards of a miniature species, and rarely its weight exceeds the mark of 35 kg, while cases are recorded where the calves at birth reach a weight of 40 kg. Due to this feature of newborns, adult cows do not encounter pathological changes, as well as other problems that often accompany the birth process.

The Bestuzhev breed of cows carries small calves without problems, as a result of which they do not face psychological and physical injuries . At the same time, the young are born with good health, and subsequently successfully develop. Confirmation of these words can be considered statistics that indicate that the percentage of survival of young animals exceeds the rates of 95%.

The good development and active growth observed in the first stages of development after birth, contribute to the calves to survive and remain active. The period of rapid development slows down at the age of three months, which contributes to the normal formation of internal organs and systems. The Bestuzhev breed, already at the age of six months, is capable of gaining weight from 150 to 180 kg, depending on gender, however, the key condition for achieving such indicators is a proper diet, which is rich in all necessary nutrients and vitamins.

Bestuzhevskaya breed is becoming increasingly popular, and this applies to both private farms and specialized farms, which are based on the indicators of breeding efficiency. In many ways, professional and novice breeders, this breed attracts:

Each of these factors is key, as experienced cattle breeders indicate them as the most common problems content.

In conditions of normal adaptation, cows of this breed are able to start high-quality breeding as soon as possible. Having the right approach used in breeding processes allows you to gain young stock at the optimal level, as well as significantly save on the primary costs. The feeding process of Bestuzhev calves should begin one month after birth and continue until one year of age. As food in this period, you can use:

By When bulls reach the age of one and a half years, fattening occurs using hay, as well as enriching the daily diet with food waste. In addition, the use of the American system for rearing young animals can be effective. It involves keeping calves in the same room with an adult, so that, as necessary, animals can suck in milk, supplementing the daily diet. The characterization of this type of content indicates the emergence of a number of possibilities, but its implementation should be thought out and adapted to existing conditions. American technology can also be applied in the pasture type of cultivation.

Conditions for augmentation of the farm

Youngsters of the Bestuzhev breed of cows should be transferred to an area where they are 8 months old to be further fed, which involves adding to the diet concentrate. At the same time, getting good offspring requires an especially careful attitude and increased attention to the female, who will bear him in the future.

The cow, which will continue to calve, should receive intensive nutrition rich in substances necessary for optimal development. Preliminary preparation of a cow for insemination should imply some changes in the daily diet, where a third of the total volume should be taken by concentrate, and the remaining 70% should be covered by greens, silage or hay.

As mentioned above, the Bestuzhev breed, due to the peculiarities of the development of the fetus, it experiences calving quite simply, and such nutrition provides an intrauterine new life with all the necessary substances.

It is quite simple to keep the Bestuzhev breed, because its key pre The essence is unpretentiousness. In addition, it easily and simply adapts to various conditions, so the geography of its breeding is constantly expanding. At the same time, in order to provide the bestuzhev breed bulls and cows with optimal conditions, regular cleaning of the shed is necessary, since they need cleanliness.Ideally, carrying out a general cleaning using special tools in the pens should be a weekly procedure. Due to this, it is possible to ensure that the Bestuzhev cow does not face health problems.

It is very important that in the room where the Bestuzhev cow is kept, a comfortable temperature regime is observed, which assumes normal fresh air in the summer, as well as heat and dryness during cold weather. In order to avoid the onset and development of infection, bulls and cows should be examined regularly, and if problems are found, they should seek help from a specialist in a timely manner. Observing how the cow behaves also allows you to determine the problem in time and take immediate action.

How to feed correctly

Another condition for maintaining health and optimal development of representatives Bestuzhev breed is the control of food quality. Any breed of cows, including representatives of the Bestuzhev breed, is very demanding on the quality of the daily diet, since spoiled food can cause serious problems with the gastrointestinal tract and significantly slow down the development of the animal.

Bestuzhev cow should receive daily the necessary amount of nutrients, as well as vitamins, due to which the main characteristic becomes achievable – milk and meat abundance. A cow who is preparing to become a mother should receive special nutrition, which can be properly developed and selected by an experienced specialist in the field of veterinary medicine.Grazing of bulls and cows should be very long, because such conditions are optimal for them.

To date, the Bestuzhev cow is widely used in many farms, since it is capable of bring good profit, as, in fact, the breeding of bulls of this breed. The main distinguishing features have already been listed, thanks to them, despite the fact that the animal world (in particular cows) is very diverse, many farms are able to boast a breeding system for breeding this breed.

Some of the few shortcomings of the Bestuzhev breed are more than overlaps with those benefits that are visible to the naked eye. The average efficiency indicator for the breed is significantly ahead of the closest “pursuers”, so you can really be proud of the Bestuzhev breed. In general, the rate of breed popularization is not so great, but the process is going on steadily, since the characteristics that it possesses cannot go unnoticed not only by specialists, but also by beginning farmers.